The Problem With Food Waste 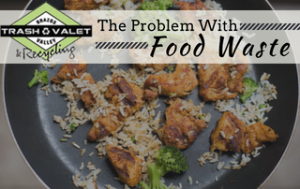 In the United States, food waste makes up 1.3% of the total GDP. And this isn’t specifically a US problem. Throughout the world, about 33-50% of food produced is thrown away. This happens in restaurants especially. When customers don’t finish their food, or produce isn’t used on a particular night, it’s thrown away and more food is purchased. But even in homes, often when food isn’t finished, it’s simply tossed.

This is not only morally irresponsible — given the 1 in 6 people in the United States facing hunger — but disastrous for the environment. Land is frequently deforested in order to grow fresh produce, much of which is thrown away. And when food decomposes, it creates methane. If you thought carbon dioxide was a problem, this should be a big concern. Methane is about 30 times more potent than carbon dioxide.

Fortunately, there are steps that can be taken to reduce food waste, and as we become more aware of the problem, more is being done to stop it.

What Restaurants Are Doing

Many restaurants, conscious of this problem and of their customers’ concern, have started to take steps to waste less food. “Stem to root” cooking has become more prevalent in restaurants, in order to ensure that the entire plant is used. Asparagus stems can give texture to asparagus soup. Carrot tops can be used as garnish. There are companies across the country now working with restaurants to collect their food scraps at the end of the night. Leftover food is also being donated to charity to feed the hungry in this country.

What Farmers Are Doing

Food waste doesn’t start at restaurants and supermarkets, though. It starts at farms. 7% of produce is left in the fields every year, unharvested. But farmers are beginning to manage their food waste as well. It often comes down to planning. A careful planner researches how well certain plants will do in their climate before planting them. They schedule strategically and keep a close watch on the fields so they can spot problems right away. All these tactics help to ensure they’re able to harvest as much of their crops as possible.

What You Can Do

One of the biggest ways consumers can reduce their food waste is to stop overbuying in supermarkets. It might seem appealing in the moment to stock up on produce so that you won’t have to buy as much next time, especially when there’s a sale. But if it’s more produce than you need, it will eventually be left to rot in your fridge, and finally your trash cans. Plan out your meals before you leave and know exactly how much you need. Speaking of meals, make sure you’re not making bigger servings than anyone in your home will eat. If you’re likely to eat leftovers for lunch, go ahead and make a little extra. Otherwise, keep it trimmed down. When you have food scraps, you can use them to create compost, and if you find you have more food than you plan to eat, consider donating it to local food banks. One way to keep your food waste in check is to make a list of all the food you waste each day. When you see it written out, it will be easier to reduce it.

At Brazos Valley Trash Valet & Recycling, we know how important it is to be as close to zero waste as possible, with food waste and all kinds of waste. That’s why we offer complimentary recycling services with our residential trash pick-up. Contact us today for more information.