“Bigger than Texas” is a phrase that gets thrown around a lot to describe something that is astoundingly large. Of course, when someone says they have a pimple bigger than Texas or their neighbors have a swimming pool bigger than Texas, we can safely assume that they’re exaggerating a little. But you know what is actually bigger than Texas–in fact, twice the size of Texas. The Great Pacific Garbage Patch. And it’s a problem for our economy and our environment.

What is the Great Pacific Garbage Patch? 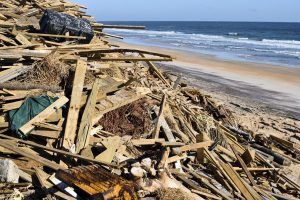 The Great Pacific Garbage Patch, or the Pacific Trash vortex, is the name given to the collection of debris and plastic waste floating around the pacific ocean. It is estimated to have 7 million tons of weight and be twice the size of Texas. According to scientists, it’s not so much one “garbage patch” as several garbage patches, but the fact remains that in the Pacific Ocean right now, there is more plastic than plankton, which most sea animals need for food. 80% of this waste is said to come from North America and Asia.

What does the Great Pacific Garbage Patch mean for our environment?

The most obvious effect is the effect on sea life. Sea animals are frequently entangled in plastic waste or otherwise harmed by it, and somewhere between 5-10% of fish are said to contain pieces of plastic in their system. The debris also stunts the growth of algae, because the plastic distorts that natural sunlight that usually shines through the water. Many of the plastics dumped into the Great Pacific Garbage Patch also emit harmful chemicals that have disastrous effects on sea life. The World Economic Forum even predicts that by 2050, there will be more plastic in the ocean than fish.

What can you do about it?

There’s a lot that needs to be done to solve the problem of the Great Pacific Garbage Patch. It will take massive amounts of ships to remove all the waste from the ocean, and then there’s the question of what to do with that waste. Companies will also need to make changes to the way they design packaging so that it’s easier to reuse or recycle rather than using materials classified for marine debris. You can start at home by reusing all the plastic you can and recycling what can’t be reused. Talk to your local trash and recycling service about acceptable plastics to recycle.