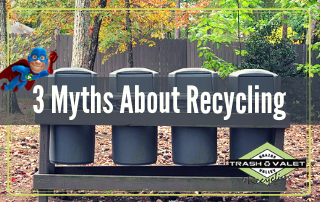 For the most part, recycling is seen as a good thing: a fairly easy thing that anyone can do to help the environment. However, there is a fair amount of discourse about the real impact of recycling, and whether it’s even counterproductive to recycle. Information abounds and though not all of it is accurate, it’s often the inaccurate information that finds its way into discussions about recycling. So let’s set the record straight: what common ideas about recycling are actually myths, and what’s the truth?

This is a myth that’s often touted even by academics and environmentalists. It’s the idea that recycling offers only minimal benefits to the environment that are completely undone because it takes more energy to recycle than it does to make something new. However, despite its respected champions, the Environmental Protection Agency has done research that paints a different picture.

Products Made from Recycled Materials Are Subpar

Recycling Materials Have to Be Tediously Sorted

One major concern about recycling is the sorting process. You may have noticed that some recycling companies only accept one or two types of plastics and a limited amount of other recyclable materials. This can be frustrating and a bit of a betrayal when you’re initially led to believe that something is recyclable. It’s true that sorting recyclables used to be much trickier than it was in the past. It had to be sorted by the consumers themselves, or by hand, which could be as expensive as it was tedious.

So you know the myths as well as the facts about recycling. The next step is setting up your own recycling service. At Brazos Valley Trash Valet & Recycling, we offer a complimentary recycling bin along with your monthly subscription of residential trash pick-up. Contact us today for more information.