4 Myths and Misconceptions About Recycling 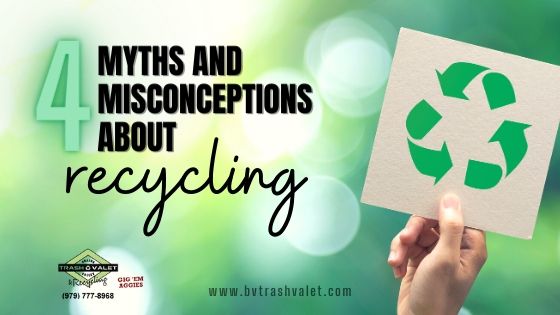 Many homeowners have good intentions when it comes to recycling and helping reduce their environmental impact. But sometimes misinformed recycling can do more harm than not recycling at all. In fact, recycling the wrong items can even potentially contaminate the whole batch. Unfortunately, there are plenty of myths and misconceptions that have been accepted as fact when it comes to recycling. Today, let’s shed some light on the truth behind these myths and misconceptions about recycling.

There’s some truth to this misconception. Grease from the pizza can seep into the cardboard, contaminating it and — when dumped in the recycling bin — contaminating the whole batch. Often when greasy pizza boxes are recycled, the whole bin has to be thrown out. Fortunately, the grease does not typically spread throughout the box. You can cut out the contaminated pieces of the box and throw the rest of the cardboard away.

“America Has a High Rate of Recycling”

Recycling in America has certainly gone up in the past decades, but we still have a long way to go. Unfortunately, many Americans have become complacent, assuming that the recycling rate is higher than it is. The current recycling rate in the US is only about 34.5%, significantly lower than many other countries. When you let yourself think that everyone else is doing it, so you don’t have to contribute, it allows the entire community to become more complacent about recycling.

“Recycling Is Too Expensive”

It’s true that some curbside recycling can be expensive when compared to trash pickup, but this is far from the norm. In fact, the EPA estimates that an efficient, well-run recycling program costs between $50-150 per ton, roughly equivalent and sometimes even cheaper than trash pickup programs. It’s also assumed that it costs more to create products with recycled material rather than raw materials, but in truth, it costs twice as much to create products with new aluminium as opposed to recycled aluminium. And when you opt for weekly trash pickup from Brazos Valley Trash Valet & Recycling, your recycling bin comes complimentarily.

It’s easy to assume that all recycling programs collect the same materials and sort and process them in the same way. However, this could be a dangerous assumption.The truth is every recycling company has a list of acceptable materials. Many recycling programs in Texas only accept plastics #1-2, despite the fact that all plastics have the recyclable symbol. Single stream recycling is better able to collect more materials, however, which allows Brazos Valley Trash Valet & Recycling to accept more recycling materials than the competition.

At Brazos Valley Trash Valet & Recycling, we’re happy to set the record straight about recycling. Contact us today for more information about our recycling program, including our acceptable materials, or to sign up for weekly trash pickup with complimentary recycling.