How Plastic Bags Impact the Environment 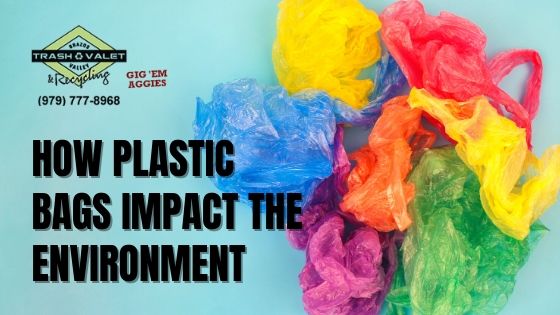 According to the Earth Policy Institute, A trillion plastic bags are used worldwide each year. That’s almost 2 million plastic bags used per minute. While some plastic bags are recycled, far more often they end up littering both city streets, forests, and waterways. Because plastic is not biodegradable, they do not eventually “return to nature” but instead continue to release harmful toxins like bisphenol A (BPA) and PS oligomer. These toxic chemicals contribute to air pollution and potentially harm plant growth when left littering the forest.

When plastic bags are left to litter waterways, toxic chemicals are released into the water, contaminating them. This is problematic both for water-based ecosystems and for humans when that waterway is a source of drinking water. Plastic bags can also block drainage systems in key waterways, which has particularly been an issue in developing countries such as Bangladesh. Plastic bag waste is also a major contributor to the Great Pacific Garbage Patch.

Birds and other animals don’t look at plastic bags and see that as someone’s trash. In fact, often, they end up ingesting pieces of plastic bags. Midway Atolls in the North Pacific have often been found dead due to consumption of plastic bags. What’s worse is that they often feed bits of plastic to their young, killing them as well. In the ocean, floating plastic bags can be mistaken as jellyfish by predators, which causes yet another potentially deadly situation. Some animals have choked themselves on accident due to plastic waste litter.

What to Do About Plastic Bag Waste

Fortunately, you can help to reduce plastic bag waste. Many recycling companies will not pick up plastic bags as they can jam the machine and slow down the whole process. Plastic bags are made with low density polyethylene (LDPE), or plastic #4 in recycling terms. Most recycling companies only accept plastics #1-2; however, Brazos Valley Trash Valet & Recycling accepts plastics #1-7. You can also keep a stash of plastic grocery bags to reuse around the house, thereby lengthening the lifespan of plastic bags before they are thrown away and decreasing the need for additional plastic bag production.

Brazos Valley Trash Valet & Recycling can help you to handle your waste management in a smart, eco-conscious way. We offer weekly trash pickup including one complimentary recycling bin. Contact us today for more information or to sign up for our monthly subscription for just $21.95.