How Many People Actually Recycle?

For many people today, recycling is common sense. At BV Trash Valet & Recycling, we agree! We have found that even people who don’t necessarily care about environmental change will recycle if there are convenient ways to do it in their community. It is obvious to the casual observer that recycling has become much more prevalent in the past couple of decades. However, this begs the question – How many people actually recycle? 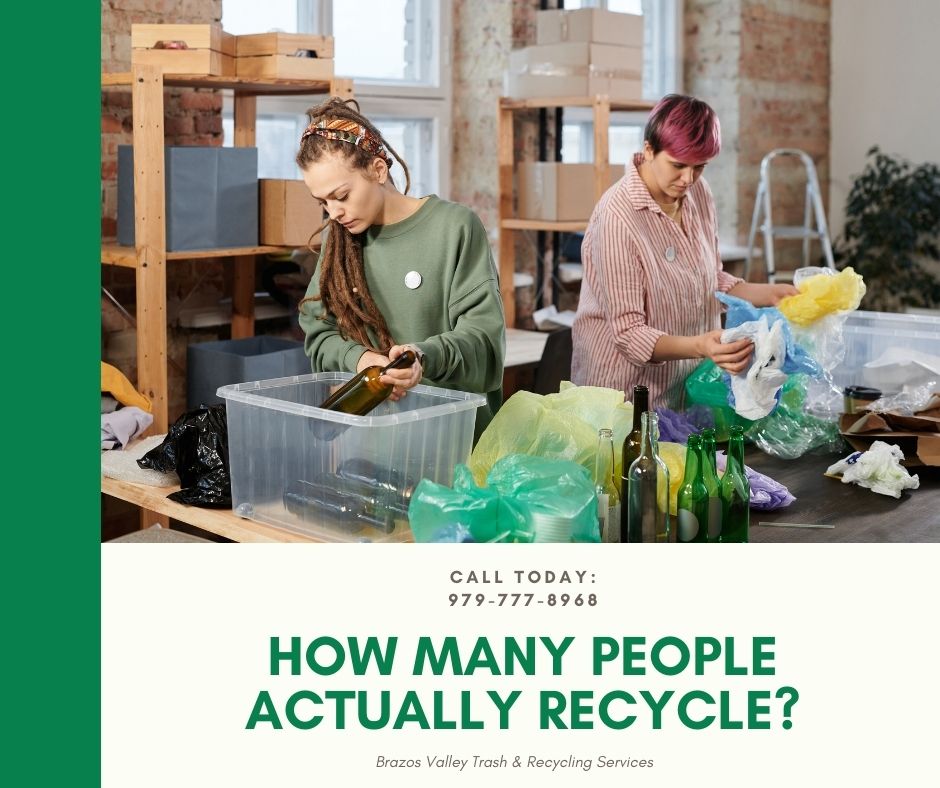 Unfortunately, It’s Not That Simple.

Many factors can influence calculations meant to determine how many people are dedicated recyclers. For example, a survey would undoubtedly have plenty of people claiming that they recycle everything. Still, the sad truth is that many people don’t understand exactly what is recyclable and what is not.

This means that even those who believe that they recycle 100% of their recyclables are likely contaminating their recycling with items that cannot be recycled and thus not actually recycling.

While it is nearly impossible to pinpoint precisely how many people are committed to recycling, the Environmental Protection Agency does perform studies to determine what percentage of recyclables are being recycled.

The United States has seen a significant recycling increase in the past few decades. According to EPA.gov, “The recycling rate has increased from less than 7 percent in 1960 to the current rate of 32 percent.” While a 32 percent recycling rate is a number that we definitely need to continue improving on as a country, it is significantly higher than it has been in previous years.

More accessible information regarding recycling awareness and improvements in recycling methods and technology have played an integral role in the increase in recycling for the average American. The more waste that is recycled, the less damage we cause to our environment year after year.

Be Part of the Solution

Taking just a couple of minutes each week to separate recyclables from trash and properly disposing of them can make a huge difference if more and more people make this a habit.

If you are unsure about the proper disposal methods for specific items or have any other trash or recycling-related questions, please contact us to learn more!