The 3 Best Ways to Dispose of Ammunition 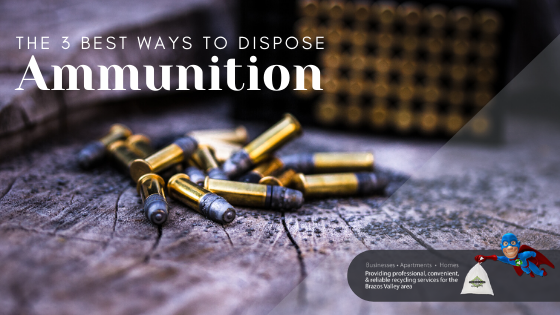 There’s no use holding on to old junk that you no longer need, but some items are trickier to dispose of than others. One thing that throws many conscientious homeowners through a loop when it comes to trash and recycling is what to do with old or unusable ammunition. It may be bullets that you no longer want or need, or casings that have already been used. It seems unlikely that ammunition can simply be thrown into your recycling bin, so what’s the solution?

First, let’s discuss what you should never do with unusable or unwanted ammunition.

How Not to Dispose of Ammunition

Never bury ammunition that you no longer want or can no longer use. The lead often used in making bullets can be harmful for the environment, especially if it seeps into the water supply and contaminates it. Throwing old ammunition away can also be problematic, as the collection process could cause the cartridge to fire. One misconception is that the ammunition can be soaked in oil, thus soiling the gunpowder, and then thrown away. However, this might not work every time, so it’s not a reliable disposal method.

While recycling ammunition may not be as simple as recycling a plastic water bottle, it is possible. Used ammunition is simply a brass casing. Wash them out to rid the casing of any lingering gunpowder and then find a recycling center that accepts scrap metal, particularly brass shell casings. These shell casings are used to make new ammunition, thus saving manufacturers from having to use raw materials. You can also purchase a kinetic puller to disassemble the cartridge in order to safely recycle unused ammunition.

Just because you don’t want or can’t use your ammunition doesn’t mean that others won’t. Local gun ranges will accept unwanted ammunition, and even sometimes accepts dud rounds so as to dispose of them safely and effectively. Police stations will also sometimes accept small amounts of ammunition. Make sure to call the local number for the police station to ask if they’re accepting ammunition.

Need help with your other trash and recycling needs? Brazos Valley Trash Valet & Recycling has you covered, with one complimentary recycling bin with every trash pick-up subscription and more acceptable materials than our competition. Contact us today for more information.